Spending a day at Disneyland can feel like running a marathon. Even on a regular day, it is not hard to hit 10,000 steps by noon. I averaged about 20,000 steps per day on my most recent Disneyland trip. To keep up with all of that walking, I rely on taking breaks. When I’m vacationing at Disneyland and staying off-site, it can be a hassle to get back to the hotel for my mid-day break. So instead of messing with Ubers, or parking trams, I have found many attractions and places to take a break at Disneyland while staying in the park.

Some of the best places to take a break at Disneyland might not even feel like a boring intermission in your day. There are several shows (some indoor and some outdoor) to take in while you relax and get a load off of your feet. You could even take a loop, or two, or three, on the Disneyland Railroad which circles the whole park.

So if you’re getting tired and need a break, don’t worry, you don’t have to leave the park! Just keep reading for all of my best tips and favorite in-the-park break locations. And if I missed any of your favorite spots, leave a comment at the end of the article to share with our other future readers!

Indoor Places To Take a Break at Disneyland:

When I need a nap in Disneyland, but I don’t want to go back to my hotel, this is the first place I am going. It is an indoor show about the history of the nation, focusing on Abraham Lincoln’s story. This show is also a major piece of Disney history, as the animatronic of Abe was the very first human animatronic ever made. It is still used today exactly as it was on it’s day of debut, back in July of 1965.

The best part of this show, and the reason it is one of the best places to take a break in Disneyland, is that it is completely dark in the auditorium while it’s going on. So it is not so obvious to those around you that you might be napping! It is also not a very loud or particularly exciting show, so it’s not too difficult to really rest here. This is also a fairly long show, at 15 minutes total. So you’ll also have plenty of time to rest during the show.

Although, my favorite way to enjoy this show is with a fresh cup of coffee from the Starbucks on Main Street. Just pop in to the Starbucks on your way up to the front of the park to see the show. Beverages are allowed in the auditorium.

This show is also indoors, and is also about 15 minutes long. This show, however, is not as good of a place to nap as Great Moments with Mr. Lincoln. Although, that doesn’t mean it’s a bad choice for a place to rest, of course!

I like taking a break here because it allows me to get some time off of my feet. But also feel like I’m experiencing a true Disney attraction. So I’m taking a break without missing out on any of the fun.

Also, you are allowed to grab a Dole Whip from the stand in front of the theater, and bring it in the theater with you. So why not kill two birds with one stone? Eat your Dole Whip while taking a break to watch the Tiki Room show! This is most definitely one of my favorite ways to catch a break in Disneyland. Dole whip and catchy Disney tunes? Sign me up!

The Tomorrowland Theater is an often overlooked attraction in Disneyland by many vacationers. This is probably the one spot on this list that many people don’t even consider as one of the places to take a break at Disneyland. It is located right next to the entrance of Space Mountain. The theater is a nice place to take a break because it is similar to Great Moments with Mr. Lincoln. It is indoors, and is movie theater style with individual cushioned seats. And it is dark in the theater while they show the films.

Rides To Take a Break on at Disneyland, While Riding:

Still looking for your break spot? Consider catching a ride on either the Mark Twain Riverboat or the Sailing Ship Columbia, which both leave from Frontierland every 10-15 minutes. These large boats sail around the Rivers of America, passing by Frontierland, New Orleans Square, Critter Country, and even a bit of Star Wars Galaxy’s Edge. A full trip around is about 15 minutes long.

Both ships have plenty of benches for seating, either indoors or outdoors. There is also a narration played over the speakers on the boat describing the areas you’re sailing through to keep you entertained. The narration is different on each boat, so if you really need an extended break, why not hop on both?

While Great Moments with Mr. Lincoln is my favorite show to take a break at, hands down, the Disneyland Railroad is my favorite ride to take a break on, without a doubt. A full trip around on the Railroad takes about 25-30 minutes including the stops to allow passengers to get on or off. The full ride is narrated over the speakers, which gives you more details about the sights along the way.

The Disneyland railroad is my favorite ride to take a break on because of the length, the great people watching factor, and the classic Disney charm throughout. Taking a ride on the railroad gives you vantage points of the park that you would not get otherwise. You can ride through the Grand Canyon and the land of the dinosaurs. You can also ride through “it’s a small world” and Splash Mountain. To me, a trip is not complete without a ride on the Disneyland railroad. And I often use that ride time as a nice break off of my feet.

Outdoor Shows To Take a Break at in Disneyland:

Mickey and the Magical Map

This is another great show option to take a break at Disneyland without leaving the park itself. Mickey and the Magical Map is an outdoor stage show that features live actors, singers, and dancers that take you through several classic Disney stories. The show covers Disney movies from The Jungle Book, to Pocahontas, to Tangled and The Princess and the Frog.

While this show is outdoors, it is completely covered, so there will be ample shade and rain protection. In my eyes, one drawback of this show compared to a show like Great Moments with Mr. Lincoln is the seating. Here the seating is stadium style on metal benches shared by many park guests. Whereas in Great Moments with Mr. Lincoln seats are more movie theater like, with cushions and seat dividers.

Nevertheless, this show is still a great option for taking a break in the park. It is one of the longest break options on this list as it is about 25 minutes long from start to finish. This theater also allows you to bring food and beverages inside to eat while taking in the show. Personally, I recommend grabbing one of the famous loaded baked potatoes from Troubadour Tavern, the stand right outside of the theater, to enjoy while watching.

Another outdoor show to check-out if you need a break is Storytelling at Royal Theatre. This is located in Fantasyland at select times throughout the day. You can check the Disneyland App for the exact times on the day you’re there.

This experience is led by two thespians on stage who share the stories of classic Disney movies like Tangled and Beauty and the Beast. The seating arrangement is similar to the theater for Mickey and the Magical Map, but it is a smaller theater overall. Here, the seating area and the stage are covered and shaded.

But the seating is on benches, that do not have backs or cushion, and are not stadium style either. So it may be hard for little kids to get a good direct view here. However, it is not usually crowded at these shows, so you still have a good shot at a good view, and a relaxing break.

Disney at Home: Bring the Magic Home With 4 Ideas

Mobile Order Starbucks at Disneyland: What You Can, And Can’t Do 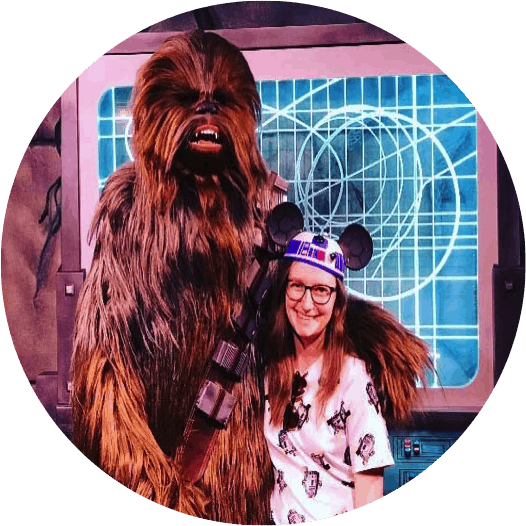